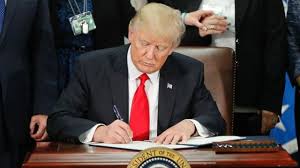 US President Donald Trump signed a revised ban on travelers from six Muslim-majority nations Monday — one with a reduced scope so Iraqis and permanent US residents are exempt.

The order places a 120 day freeze on all refugee arrivals.

The revised ban, which comes into effect on March 16, said the six countries were targeted because their screening and information capabilities could not meet US security requirements.