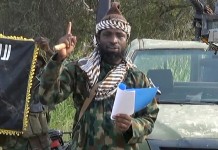 A new video of the factional leader of the Boko Haram terror group, Abubakar Shekau, surfaced online on Thursday, where the fleeing militant leader urged President Muhammadu Buhari to repent while mocking the Nigerian military for claims that it had defeated the terror sect.

In the 25-minute video, released by the Paris-based AFP, Shekau, who spoke in Hausa and Arabic, debunked claims of victory by the military.

The video, which Shekau claimed was made on Christmas Day, had the sect leader and some of his armed-hooded lieutenants with military hardware in the background.

He said the announcement by the military that it had won the war was an excuse for their exhaustion.