Breaking News
Home / All News / Saraki, Dogara off to London to see Buhari 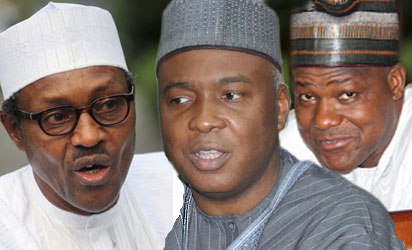 Saraki, Dogara off to London to see Buhari

A very reliable source confirmed that the two principal officers of the National Assembly travelled on Wednesday to meet with Buhari who is on extended vacation for medical reasons.

After the initial ten-day vacation President Buhari earlier requested for which was to end on February 6, he wrote the Senate  on the eve of resumption that he will be staying back in London to complete some required tests.

The President did not indicate when he will return to the country.

When contacted, Special Adviser on Media to Senate President, Yusuph  Olaniyonu declined to speak on the matter. He said ” I don’t know about that. I dont have any information on it”