Breaking News
Home / Protesters set Paraguay congress on fire / PARAGUAY PROTEST CONGRESS
epa05881932 Fire burns after protesters stormed the National Congress in Asuncion, Paraguay, 31 March 2017. Paraguayan president, Horacio Cartes, is trying to amend the constitution which will allow him to be re-elected in 2018 raising fears that the country is headed toward dictatorship, according to media reports. EPA/ANDRES CRISTALDO 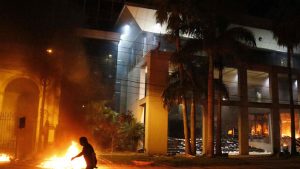