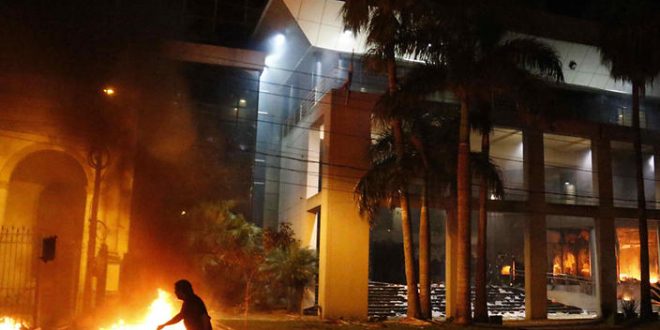 epa05881932 Fire burns after protesters stormed the National Congress in Asuncion, Paraguay, 31 March 2017. Paraguayan president, Horacio Cartes, is trying to amend the constitution which will allow him to be re-elected in 2018 raising fears that the country is headed toward dictatorship, according to media reports. EPA/ANDRES CRISTALDO

Demonstrators in Paraguay have set fire to the country’s congress amid violent protests against a bill that would let the president seek re-election.

The head of the main opposition party said an activist had been shot dead.

The country’s 1992 constitution, introduced after 35 years of dictatorship, limits the president to a single five-year term, the BBC reports.

But sitting President Horacio Cartes is trying to remove the restriction and run for re-election.

Protesters were photographed smashing in windows of the congress building in Asuncion on Friday night and setting fire to the interior.

The protesters “ransacked” the offices of those who backed the bill.

Local media reports said dozens of people had been injured, including protesters, politicians, and police officers.

The head of Paraguay’s opposition Liberal party, Efrain Alegre, said a young man had been killed during the protests.

Previous Boko Haram abducts 22 girls, women in Borno
Next I have fulfilled all promises to the winners – Prince Eerik A. Odigie Odigie