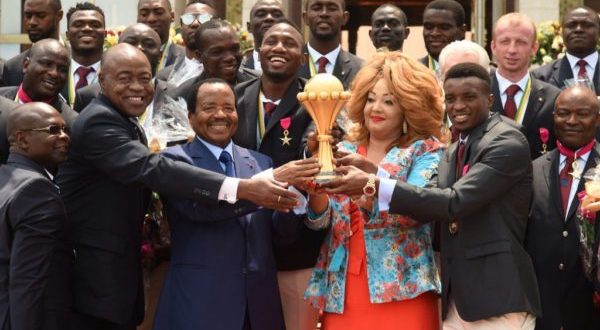 It was at the reception for the team, during which Biya said the team had done Cameroon proud. As a bonus, the footballers had a chance to take selfies with Chantal, Cameroon’s beautiful First Lady at the Palace of Unity in Yaounde.

” You are North or south, East or west, you are first and foremost Cameroonians. When Cameroon are united together, nothing can stop them,  ” he added.

The Captain of the national team, Benjamin Moukandjo expressed gratitude for the reception.

“We thank the Cameroonian people. We thank Especially our coach. We are patriots.
If we stumble, keep  supporting us,” he said.

At press time, it was not clear whether President Biya would spoil the team with monetary gifts or cars.

The team arrived Yaounde on Tuesday from Libreville, where they picked their fifth African title, beating Egypt 2-1on Sunday.

A dramatic comeback in the final against Egypt sealed Cameroon’s first major title since 2002 with second-half goals from Nicolas Nkoulou and Vincent Aboubakar cancelling out Mohamed Elneny’s opener.

In a show of support, hundreds of fans arrived at Yaounde Nsimalen International Airport to get a glimpse of their returning stars and the famous golden trophy.

Captain Benjamin Moukandjo led his troops off of the plane and through the terminal, holding the trophy aloft to the delight of the awaiting crowd. The players and staff also showed off their winners’ medals.

Cameroon were fitting winners of the Gabon-hosted tournament, as it means they will enjoy status as reigning champions as well as hosts when the 2019 tournament gets underway.

To celebrate that fact, the team wore T-shirts embroidered with the logo for the next AFCON tournament and sang the national anthem before making their way onto the team bus.