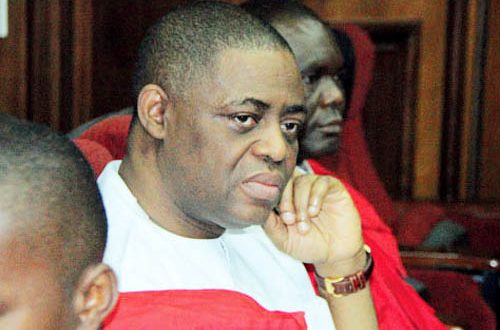 EFCC to judge: don’t disqualify yourself in Fani-Kayode’s trial

The Economic and Financial Crimes Commission (EFCC) has asked Justice Muslim Hassan of the Federal High Court in Lagos not disqualify himself from adjudicating the trial of former Minister of Aviation Chief Femi Fani-Kayode.

It said the former minister’s application for the judge to recuse himself was a bid to “scuttle” the trial.

EFCC arraigned Fani-Kayode with former Minister of State for Finance, Senator Nenadi Usman, on a 17-count charge of laundering about N4.6billion. They pleaded not guilty.

Fani-Kayode said Justice Hassan, who worked as Head of Legal at the EFCC before his appointment as a judge, signed the money laundering charge for which he was previously tried and acquitted by Justice Rita Ofili-Ajumobia on July 1, 2015.

But, EFCC, in its counter-affidavit deposed to by Idris Mohammed, urged the judge not to grant Fani-Kayode’s application.

The commission said Justice Hassan only signed the charge against Fani-Kayode in compliance with EFCC’s policy that a charge assigned to a private legal practitioner must be signed by the Head of Legal of the zone.

The prosecution said Justice Hassan never had any personal contact with Fani-Kayode, and was not a member of the team of investigators and prosecutors that handled the former minister’s trial.

EFCC said the charge against Fani-Kayode, which Justice Hassan signed, was farmed out to a private prosecutor, Mr Festus Keyamo. It added that Justice Hassan never appeared as a prosecution counsel in the case.

It said the charge was drafted by Keyamo and was merely signed by Justice Hassan on behalf of EFCC chairman to prevent objections to its validity in court.

The prosecution said the judge has not demonstrated any likelihood of bias against Fani-Kayode, having granted him bail upon arraignment and even rebuked the EFCC for re-arresting the former minister in court in relation to another charge.

“This honourable court does not have any personal interest in this matter and would not have granted the applicant’s application for bail if there is any likelihood of bias against the applicant.