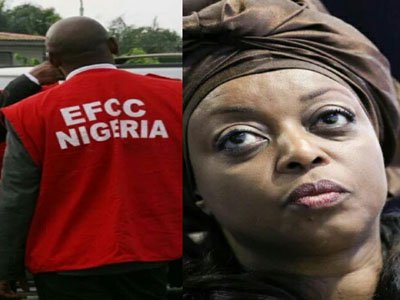 Diezani’s alleged loot: EFCC hunts for another ex-GMD of NNPC

The Economic and Financial Crimes Commission( EFCC) is hunting for another former Group Managing Director of the Nigerian National Petroleum Corporation( NNPC) in connection with the ongoing probe of a former Minister of Petroleum Resources, Mrs. Diezani Alison-Madueke.

The said ex-GMD was yet to respond to EFCC’s letter of invitation which was sent through NNPC to him.

The anti-graft agency may be forced to watch-list the affected ex-GMD.

The former Minister is under investigation for alleged  N23.29billion poll bribery scam; controversial withdrawal of $153m from NNPC accounts; alleged $1.6billion money laundering and oil deals; posh $37.5million assets and plots of land on Banana Island and other choice properties in Nigeria and Dubai.

The ex-GMD is said to be vital to the ongoing probe of Alison-Madueke.

A top source in EFCC said: “We are already looking for another ex-GMD of NNPC. We followed necessary protocol by inviting him through NNPC but he is yet to report for interrogation after many months of acknowledging our invitation.

“We may be forced to watch-list the former GMD which can lead to his extradition from any part of the world.

“This former GMD ought to interact with our detectives on some of the clues already at the disposal of EFCC.

“But the ex-GMD has been relying on one excuse or the other to meet with our team of investigators.”

Responding to a question, the top source said: “We have been able to trace the country where the ex-GMD is at present. We only need to locate where exactly he is staying. The good thing is that we have a Mutual Legal Assistance Treaty with his host country which can hasten his arrest and repatriation.

“The EFCC does not say the former GMD is guilty of any infractions yet. But we want him to return home to respond to some issues on Diezani.”

The EFCC has detained a former Group Managing Director of the Nigerian National Petroleum Corporation (NNPC), Dr. Andrew Yakubu’s over alleged slush funds of  $9,772,800 and £74,000