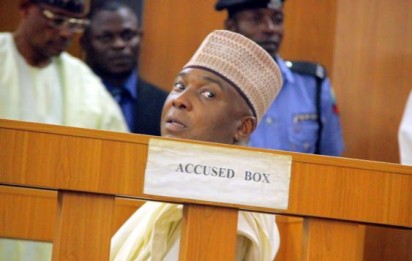 The trial of Senate President, Bukola Saraki, at the Code of Conduct Tribunal (CCT) was stalled on Wednesday in Abuja due to fresh filing of 18-count amended charge. Saraki was initially standing trial on a 13-count charges for alleged false asset declaration at the tribunal.

The trial, which started in September 2015, was later amended in 2016, with an addition of three charges, making it 16-count. The Chairman of the tribunal, Mr Umar Danladi, held that the court was compelled to give a short adjournment for the defendant’s team to study the new charge.

He said “in the light of the application filed by Chief Kanu Agabi (SAN), Counsel to Saraki for adjournment, the matter is hereby adjourned until Feb. 23 for the defendant to take his plea.” Journalists report that a Prosecution Witness, Mr Samuel Madujemu, had gone half way into his testimony before an objection was raised by the defendant’s team. Agabi informed the tribunal that the Prosecution Counsel, Mr Rotimi Jacobs (SAN), had earlier served him the amended charge. He argued that the fresh charge had substantially altered the direction of the case, adding that his client required to be given time to study the new issues included. However, Jacobs objected the submission advanced by Agabi, saying that the additions which gave rise to the amended charge stemmed from testimonies of witnesses in the court. He said the fresh charge had not change the direction of the case as claimed by the defendant’s team. “I was the one who notified the defendant’s team about my decision to file an amended charge this morning. “I did also served them with certified copies of the new charge. I am surprised they have chose to use it against me. I pray the court to discountenance their motion for an adjournment as no new matter was introduced into the charge,’’ he said. Earlier, Madujemu, the Head of Investigation Division of the bureau, said the defendant’s asset declaration forms between 2003 and 2015 were shrouded in discrepancies. He said investigation into Saraki’s asset declaration forms was triggered by previous investigation conducted by the Inter-Agency Presidential Investigation Team in 2006. The witness, however, said the bureau was not part of the investigation at the beginning but was later invited by the EFCC to assist in the probe. Madujemu said “myself and two other colleagues from the bureau were directed to join the EFCC team. “We reviewed EFFC’s findings and later discovered that there were a number of infractions in the defendant’s assets declaration forms.” Newsmen report that the amended charge still borders around false assets declaration and money laundering between 2003 and 2011 when the defendant was governor of Kwara.