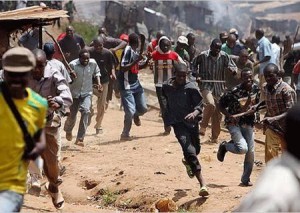 Fleeing Boko Haram Terrorists (BHT) fighters on Monday invaded Mifa community in Chibok Local Government Area of Borno state‎ killing an islamic scholar and breaking the hands of an unnamed boy.
According to‎ eyewitnesses who spoke to The Nation, the incident occurred around 9: 30 pm when about 30 Boko Haram terrorists entered the village shooting in discriminatory.
However, soldiers stationed in Chibok were quickly drafted and we\’re able to repel the attack killing one of the terrorists.
MIFA community is about two kilometres from Chibok and is the latest village to be attacked by Boko Haram.
Chibok community is surrounded by porous borders with gateway to Sambisa ‎forest making it an easy prey for BHTs. Until recently, the Army had a mobile patrol unit which patrols the various entry points to Chibok and the surrounding communities. ‎
Residents of Chibok who spoke with The Nation on telephone said they are afraid the terror group may attack the town anytime.
\”You know this is getting too much, Chibok is surrounded by bush and the borders are not well patrolled. We cannot sleep well in Chibok because of dear and that is why we want the soldiers to resume their mobile patrol,” one resident said.‎

Previous Gomis out for six weeks
Next Ban on `danfo’: Lagos NURTW asks member not to panic