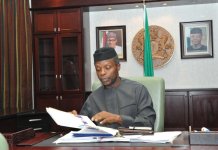 The Senior Special Assistant to the President on National Assembly Matters (Senate), Ita Enang, disclosed this in a statement on Saturday.

The presidential aide said the Acts, other than the Defence Space Administration Act and the Institute of Soil Science Act, were mainly amendments to the principal Acts intended to bring the Acts in conformity with current realities.

Enang said the Oaths Amendment Act specifically enlists courts which were not in existence at the time the Oaths Act was made and which came into being upon amendment of the Constitution creating courts such as the Federal High Court, F.C.T High Court, National Industrial Court, among others named in the Amendment Act.