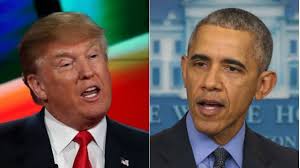 No way you would’ve defeated me, Trump slams Obama

The war of words between outgoing U.S. President Barack Obama and incoming President Donald Trump continued with Trump rejecting Obama’s claim that he could have defeated him in the November 8 presidential election if he had run against him.

Trump, in a reply to the outgoing President’s claim, took to his twitter handle and wrote in capital letters: “NO WAY!”.

The president-elect also listed some policies under Obama’s administration, which he thought constituted baggage to the outgoing President, and would have made it difficult for Obama to be re-elected had the U.S. Constitution allowed him to contest for the third term.