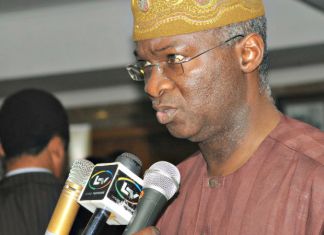 Minister of Power, Works and Housing Babatunde Fashola yesterday disowned alleged N2 billion inserted in the proposed 2017 budget of the housing sector.
The minister, who was defending the details of the N64.99 billion proposed capital vote for the Housing Sector in the 2017 budget before the Senate Committee on Housing, said he knew nothing about N2 billion listed against “Regional Housing Scheme”.
A member of the committee spotted the curious insertion and sought Fashola’s explanation about how it got into the budget proposal.
The minister promptly disowned it, saying he knew nothing about the insertion.
Apart from the N64.99 billion proposal, Fashola requested approval for additional $12 million (about N6 billion) to enable the country settle outstanding commitment to the Housing Development and Financing Organisation known as Shelter Afrik.
The organisation is said to operate under the sponsorship of the African Union (AU) and has about 44 African countries as members
The member countries pool resources together and donate to members to build houses.
Fashola told the committee the need to pay the money because the organisation was threatening to suspend Nigeria from its fold.
To avoid the embarrassment, Fashola said the money should be approved and added to the Housing Sector 2017 budget proposal.
The minister said over the years, Nigeria has not settled her obligation to the organisation.
Chairman of the committee, Senator Barnabas Gemade promised to forward the request to the Appropriation Committee with the aim of “padding the Housing Sector proposal”