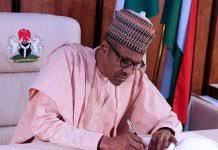 President Muhammadu Buhari has signed three bills, which had earlier been passed by the National Assembly, into law.

The Special Adviser to the President on Media and Publicity, Mr. Femi Adesina, disclosed this in a statement made available to journalists in Abuja

Adesina said the President signed the three bills on Tuesday.

One of the bills, he said, was the Federal College of Dental Technology and Therapy (Establishment) Bill, 2017.

“The college to be sited in Enugu is to provide courses of instruction leading to the award of degrees, diplomas and certificates in dental technology, dental therapy and related courses,” Adesina said.

According to him, the second bill is the Air Force Institute of Technology of Nigeria (Establishment) Bill, 2017.

He said the institute, to be situated in Kaduna, is to give technical training to the personnel of the Nigerian Air Force and other services of the Nigerian Armed Forces, Nigerians and citizens of other African countries.

The third bill, according to Adesina, is the National Intelligence Agency Pensions (Establishment) Bill, 2017, which is to administer the pensions scheme for personnel of the Agency, sequel to the exit of the Agency from the application of the Contributory Pension’s Scheme under the Pension’s Reform Act, 2004.