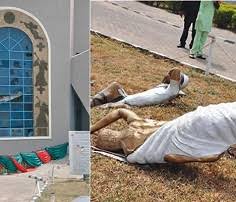 While 2018 was ushered in with pomp and circumstance all over the world, it was not so in Rivers, Kaduna and Kwara states as assailants attacked residents in the states, leaving behind sorrow, tears and blood.

In Rivers, no fewer than 14 persons were gunned down, while a traditional ruler and his pregnant wife were killed in Kaduna. In Kwara, worshippers were attacked by youths who wanted to organise a New Year carnival.

Some gunmen between 12.10am and 1am embarked on a shooting spree in Omoku, in the Ogba/Egbema/Ndoni Local Government Area of Rivers State, killing 14 persons.

It was gathered that the victims had earlier gone to their various churches to pray into the New Year and were coming back when they were ambushed.

Other people also reportedly sustained gunshot injuries and were rushed to hospitals by other residents of the community.

Some of those killed during the mayhem were said to be four members of a family, including a man and his wife.

The incident, according to a resident of the area, who identified himself simply as Ukandu, occured at two places in the area – Omoku and Aligwu.

Ukandu said the fireworks that usually greeted the New Year made it almost impossible for residents to notice that hoodlums were shooting residents.

He said, “We were shocked to see some corpses in Aligwu and Omoku. About 14 persons were killed; and some of them were shot at close range.