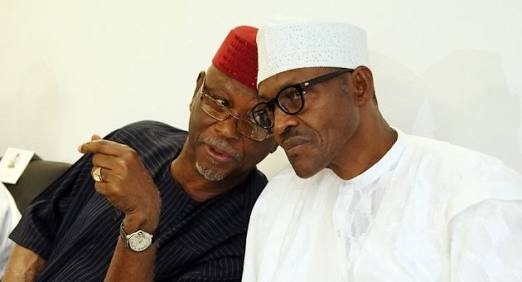 President Muhammadu Buhari sympathised with the National Chairman of the ruling All Progressives Congress, Chief John Odigie-Oyegun, over the exit of former Vice-President Atiku Abubakar from the party.

Buhari chose the venue of the inauguration of the Ama Pepple-led National Minimum Wage Committee to convey his sympathy to the party chairman who joined top government officials for the event.

The President made his position known while acknowledging dignitaries that attended the event ahead of his remarks.

Turning to Odigie-Oyegun, Buhari said, “Accept my sympathy for losing a senior member of your party.”

Although he did not mention a name, it was obvious that the President was referring to Atiku who announced his resignation from the APC

The former vice-president was one of those who contested the party’s presidential ticket ahead of the 2015 general elections and lost to Buhari.

He came a distant third behind Buhari and a former Kano State Governor, Rabiu Kwankwaso.