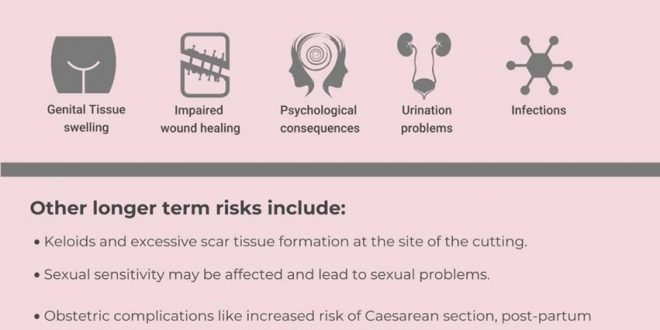 Female Genital Mutilation (FGM) is a subject that has gained international attention both from state and non- state actors over the years.

Earlier definitions of FGM sees it as female circumcision, however Female Genital Mutilation was defined in a statement jointly issued by the World Health Organisation WHO, United Nations Children Education Fund UNICEF and the United Nations Population Fund UNFPA as “all procedures involving partial or total removal of the external female genitals or other injury to the female genital organs- whether for cultural or other non-therapeutic reasons”.

The practice of FGM is deeply rooted in gender inequality, a violation of the fundamental human right of the girl child. It is carried out by traditional circumcisers who attempt to control women’s sexuality and ideas about purity, modesty and chastity.

In May 2015, the Federal Government of Nigeria passed a law banning Female Genital Mutilation and other harmful practices. However, the Violence Against Persons Prohibition (VAPP) Act applies only to the Federal Capital Territory, Abuja. As at 2018, only 13 states have domesticated the Act. They include Lagos, Osun, Ondo, Ekiti, Bayelsa, Ogun, Delta, Ebonyi, Oyo, Imo, Edo, Cross-River and Rivers State.

One may think that with all the activities of stakeholders to eliminate the practice which is shrouded in secrecy, there would be a reduction in the prevalence rate.

82% of women aged 15-49 who have undergone FGM were cut before the age of 5 while the National prevalence rate has been put at over 20 million women which is about 24.8% constituting a total of 10% of the global total put at 200 million women and girls.

The fact that FGM is carried out on children mostly fuels the culture of silence among young girls who do not even realize they were cut.

Edo state is among the states that have domesticated the Law against Female Genital Mutilation, despite this, FGM is still being carried out.

One caller who gave her name as Blessing revealed that her marriage ended when she insisted on not presenting her first and only child, a daughter to her mother-in-law for FGM. She maintained that she was asked to vacate her matrimonial home as a result of her refusal to allow her daughter to be cut. Blessing who herself experienced FGM said she vowed that she will never allow her girl child to be cut in the name of FGM.
Medical experts say FGM has Zero health benefit rather it can cause several health benefit including:

Despite the huge efforts by the Nigeria Government, Donor Agencies, NGOs and anti-FGM campaigners, to raise awareness and stop the practice of FGM and the existence of a law against it, the practice is still in existence.

This may be as a result of the fact that it is carried out early in the life of the girl child who is incapable of speaking for themselves.

There are other reasons why FGM is practiced in Nigeria. They include deeply held traditional and cultural beliefs and myths that FGM can be used to curb insatiable sexual desire in women and girls.

In Enugu State, FGM is normally done due to the patriarchal system which is obtainable in most communities in the State, which ensures male dominance over women. It is seen as a way in which the male folks subject and impose themselves on women.

Another reason is that FGM is also often considered a cultural obligation e.g. rite of passage into womanhood, Female Genital Cutting is done to elevate the woman and in some cases pregnant women, into a socially acceptable class as in the community.

In some communities, culture has evolved allowing the traditional circumcisers to carry out the required ceremony but the actual cutting of the female genitals is no longer done. Only the pubic hair is shaved as a symbolic ritual of the rite of passage for pregnant women into womanhood in Edo North Senatorial District.

The practice which denies women their right to enjoy sex and poses health challenges to them, also thrives because there is a low level of enforcement of the law and other legal frameworks which protects the right of the girl child.

In a telephone interview, Police Public Relations Officer of the Nigeria Police Force, Edo State Command, DSP Chidi Nwabueze said he is not aware of any reported case of violation of the law relating to FGM.

There is also a low level of awareness on the rights of the girl child and a lack of structures to provide support to victims who are experiencing the effects of FGM.

Comrade Cynthia Buluebiere Bright, a civil society advocate for the eradication of FGM said there should be a specialized clinic where couples who are having sexual challenges as a result of the effects of Genital mutilation can go to see help through counselling and guidance.

On her part Hon Justice Nogi Imoukhuede in a paper titled Female Genital Female Genital Mutilation (FGM): A Crime in Edo State, described FGM as a cultural practice that has been with the Edo People from time immemorial.

”The cultural belief is that FGM prevents sexual promiscuity and promotes chastity in women.

We now know that this myth is a harmful belief that militates against women’s health in Nigeria.”

She stressed that culture is dynamic and not static, therefore as we grow as a people, we should easily abandon those beliefs that are harmful, or encourage injustice to any segment of our society.

You all know that previously twins were killed at birth in Calabar because they were regarded as an evil omen. Today the situation has changed because the people were made to realize that such a belief was repugnant.